In 2019, China implemented an expansionary fiscal policy to support the slowing economic growth.

Consequently, its consolidated fiscal deficit, which includes central and local governments’ general public balances, increased to a record high: 4.9% of the nominal GDP. For 2020, Beijing pledges to maintain this expansionary fiscal policy. However, the room for action is limited by the slower fiscal revenue growth. Moreover, the COVID-19 outbreak and its implications pose a significant challenge to the fiscal stance.

In China, the term augmented fiscal balance, which incorporates special bond issued by the government, income from land-use rights and other off-budget activities, is often preferred to simple fiscal balance, as it provides a more comprehensive picture.

For example, local governments invest mainly in infrastructure to support growth, but face substantial restrictions when it comes to borrowing, at least through the budget. That is why such spending is financed mainly through off-budget activities, which the augmented balance covers. In 2019, China’s augmented fiscal deficit amounted to RMB 5.5tn, rising by 30% y/y. 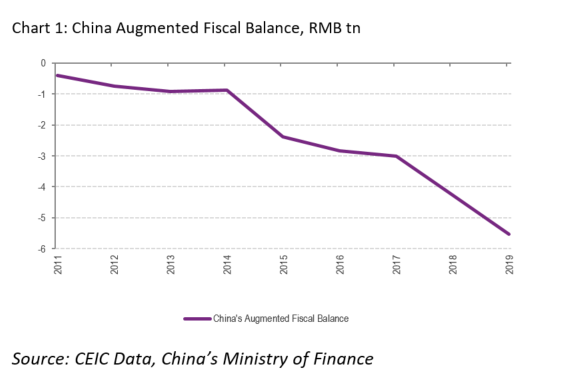 There are two main items on the revenue side of the augmented balance - general revenue and government-managed fund revenue. The general revenue, including tax and non-tax income, normally accounts for 70% of augmented revenue. 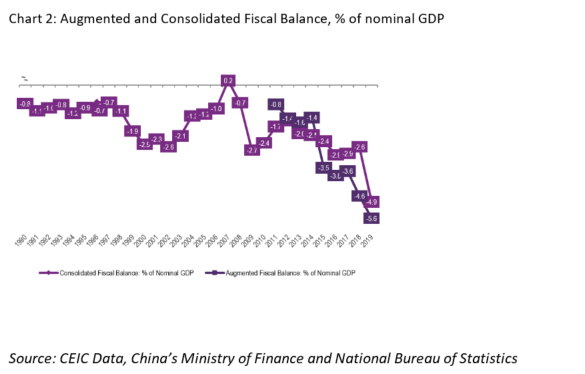 Tax income consists mainly of value added tax (VAT), corporate income tax and tax on imported products. The non-tax revenue includes special projects income, income from state-administered capital funds, and income from administrative fees and penalties. The growth of the general revenue decelerated to 3.8% y/y in 2019 from 6.2% y/y in 2018, mostly due to the gloomy macroeconomic sentiment and the large-scale tax cuts introduced in 2019.

This change was mainly driven by the slower growth of income from land-use rights, which was down to 11.4% y/y in 2019 from 25% y/y in 2018. In July 2019, Beijing confirmed that the authorities would not use the property market as a form of short-term stimulus to support the slowing economy, which resulted in a cool-down in land-use right transfer. 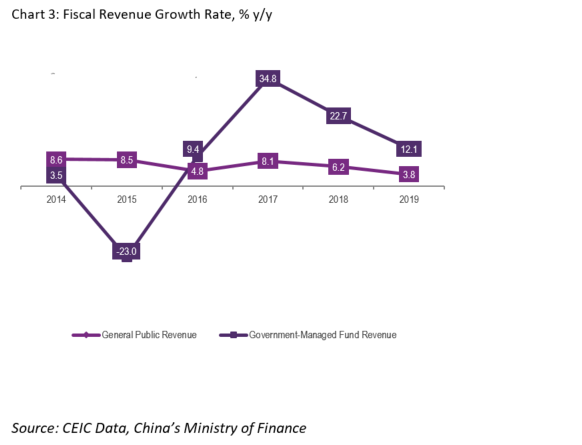 The two main items on the expenditure side of the augmented balance are general public expenditure and government-managed fund spending. The general public expenditure, accounting for 65.2% of total spending, rose by 5.1% y/y in 2019, compared to a 1.2% y/y decrease in 2018. This change was mainly driven by the government’s increased spending on environment protection and poverty alleviation projects. The government-managed fund expenditure, contributing 34.8% of the total spending, increased substantially by 13.4% in 2019, because the authorities spent more on infrastructure projects as a counter-cyclical measure.

China has embraced an expansionary fiscal policy in 2020, as stated by the ministry of finance at the end of December 2019. However, the room for such active policy remains limited because it is likely to be constrained by the continuously decelerating growth of fiscal revenue. According to the fiscal budget proposed by the local governments of the Chinese provinces, the weighted average growth of fiscal revenue is estimated at around 3.1% y/y for 2020, lower than the growth rate of 3.2% in 2019.

Hence, Beijing would strive for a general fiscal expenditure reduction of 5%-10% in order to squeeze out more room for pro-growth fiscal policy measures. China’s finance ministry said that it would put stricter regulations on proposed infrastructure projects to cut down on unnecessary spending. Moreover, Beijing is likely to postpone non-priority projects to reduce the fiscal expenditure.

In spite of the limited room for action, the Chinese government would likely spend more on key projects as a counter-cyclical measure. Specifically, there are four priority areas. The first one is poverty alleviation projects. Beijing has pledged to eradicate extreme poverty below the income threshold of RMB 2,300 per year at 2010 constant prices by the end of 2020. Second, telecommunication projects remain a priority in 2020, since technology could spur the growth of digital economy, one of the new economic growth engines. Third, high-tech industries are likely to receive more fiscal resources. For instance, both private and state-owned electric vehicle manufacturers will benefit from more fiscal spending and upgrade their technology base. Fourth, regional integration has been set as a national development goal, thus, infrastructure projects in regions such as Xiongan new district and Guangdong greater bay area could be prioritised in the following months.

The current COVID-19 outbreak poses a significant challenge to the Chinese government. As of March 8, 2020, the highly contagious disease has infected more than 80,735 people and killed 3,119. There are also confirmed cases in over 100 other countries. In an attempt to contain the outbreak, China has imposed a large-scale lockdown affecting millions of people, which will undoubtedly have a profound negative effect on economic activity. Although it is too early to assess the full impact of this public health emergency on China, it is clear the outbreak is hurting both consumption and employment. Market expectations are that China’s economic growth might slow down to 4.5%-5% y/y in Q1 2020.

Against this background, in the beginning of February Beijing announced a fiscal stimulus package to support economic activity in the production sector in a bid to ensure the supply of medicines and daily necessities. The effort is further targeted at encouraging enterprises and people to donate money and goods and at easing the tax and fee burden on industries that are heavily hit by the virus outbreak.

The Chinese government also designated a special fund worth RMB 110.48bn to combat the negative impact of COVID-19. As of March 4, 65% of the funding has already been allocated to contain the virus.

Beijing pledged that key companies that manufacture and transport medical supplies, medicines and daily necessities will be exempt from VAT and administrative fees. Further, the fiscal policy is being closely coordinated with the monetary policy to ensure that these companies have enough cash flow to run their operations. Recent data reveals that commercial banks are likely to offer more credit to them at lower interest rates and that the fiscal subsidies would cover 50% of the interest payments to ensure that the real interest rates on loans are lower than 1.6%.

You can access the full article through our CDMNext platform here. In the meantime, find out more about the CEIC China Premium Database - the most complete on the country's economy.