The Impact of Lockdown on Employment and Migrants in India

India has a large working population, employed in both formal and informal sectors. The largest portion of the formal workforce is engaged in the agricultural sector, 42.4% in 2019. The industry and the services sectors have both seen an increase in their share of total employment, reaching 25.6% and 32% in 2019 from 15.3% and 23.0%, respectively, in 1996.

However, the share of people in the informal sector outweighs that in the formal sector. The International Labour Organisation pegs the share of informal labour at 80% of the total worker population in non-agriculture sector. For the agricultural sector the share might be even higher. This is a particular cause for concern, as informal sector workers have no social security or minimum wages. The government has proposed to create a national database of workers engaged in informal workforce, such as hawkers, rickshaw-pullers, and household help to provide them with better social security. 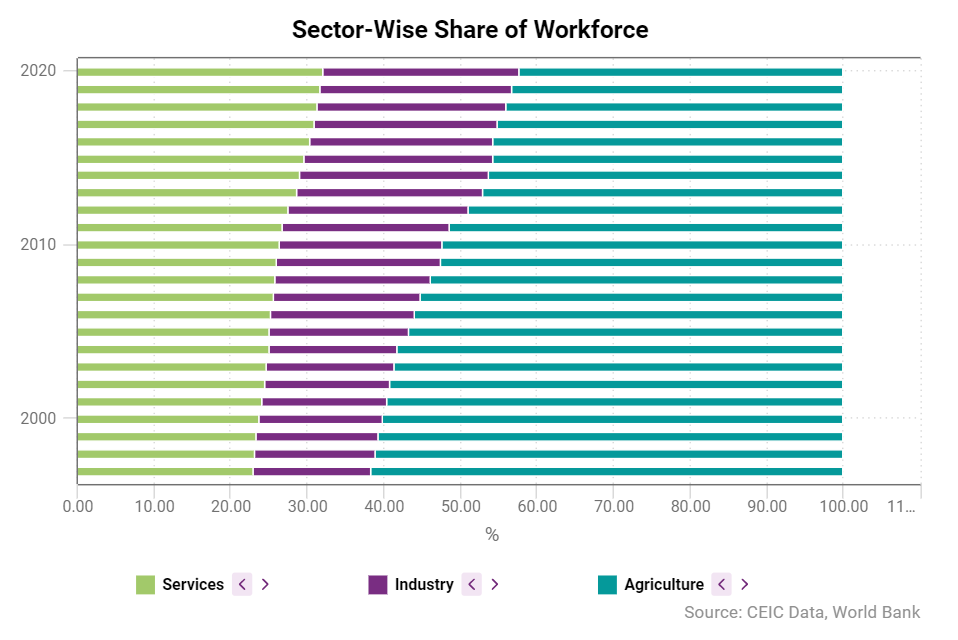 A large part of the informal workforce, both in rural and urban areas, are migrant workers, who have moved interstate to find better pay. Despite being an important matter, the topic of migration has not been explored in depth by the government, except in the three main decadal population censuses since 1991. There has not been any targeted public policy towards the protection of migrant workers. The number of migrants have increased from 1991 to 2011, while the
share of migrants who moved for either business or employment declined from 11.1% in 1991 to 9.9% in 2011 and is expected to decrease to 9.7% in 2021. However, marriage, and movement with household constitute the largest reasons for migration. This means that a lot of women in the working-age population are either unemployed or employed in the shadow economy. Hence, potentially with the formalization of work, the share of migrants for employment and business will grow due to more women joining this group.

Estimated change in migration for employment and business

In India, there has been a growing prevalence of contractual labourers, as opposed to regular labourers, especially in capital-intensive industries. This can be linked to India’s archaic labour laws that place severe restrictions on employers. These labourers do not have benefits such as provident funds, or medical coverage equivalent to those for regular employees. Migrant workers account for the majority of contractual workers, due to the seasonal nature of agriculture. As per a study by Kapoor & Krishnapriya (2019), contracts help employers lower their expenditure. They make it easier for the employers to hire and fire, so amending the labour laws becomes imperative to make them beneficial to both employers and employees.

As COVID-19 hit India, the government took measures to control the outbreak by means of a complete lockdown, triggering a humanitarian crisis. As a result of uncertainty, misinformation, and looming restrictions on movement, many migrants headed to their hometowns immediately after the first lockdown announcement. The exodus of migrant workers led many industries that started operating post lockdown, to witness a shortfall of manpower. This prompted the government to dedicate an entire section of the fiscal stimulus to migrant workers. Migrants were provided with food, shelter, and even an increase in minimum wages under the MNREGA scheme. Many states have undertaken initiatives to simplify the labour laws such as the statutory concept of national floor wage, insurance, gratuity, and a social security fund. The Prime Minister also launched the Garib Kalyan Rojgar Abhiyan programme which aims at channelling the skills of the returning migrants in developing essential amenities in their respective villages, such as tree plantations, and animal sheds, with allocation of INR 500bn. However, the programme’s scope is limited to a few northern states.

The informal economy has been the worst hit by the pandemic, impacting 80% of the working population in an adverse manner. Amidst the COVID-19 pandemic, a skilled workforce will be imperative to attract investors, and jumpstart the economy. Hence, skill development will be key to unlocking the vast potential of the Indian workforce, which is its biggest comparative advantage. There is need for greater formalisation of work an  implementation of mutually beneficial rules for workers and employers. The government’s call for an Atmanirbhar Bharat which translates to “self-reliant India”, must surely start with the people of India becoming more self-reliant.

The CEIC India Premium Database is the definitive go-to resource for analysts, investors, and strategists to assess and run analytical models on the Indian economy. Learn more here