As always, CPI is more affected by the food component than by the non-food one. Pork prices have been the main driver behind the fluctuations of the CPI for the past two years. It is believed that China's CPI will continue to increase in the first half of 2021 but at a quite moderate rate. The further recovery of the Chinese economy in case there is a working COVID-19 vaccine in the first half of 2021 will help lift the CPI a little bit more. China's central bank, the People's Bank of China (PBOC), has not taken any action to control inflation for quite a while and we believe it will continue to prioritise supporting economic growth, unless there is a large risk of hyperinflation. The central bank is not likely to take any inflation-related action in the first half of 2021 either, as it is still too early to tighten monetary policy given the uncertain international backdrop and the worrying rise of the default rate in China's credit bond market.

Every five years, China's National Bureau of Statistics adjusts the composition of the CPI. The last round of adjustments was in 2016. The current CPI basket comprises eight categories - food, tobacco, and alcohol; clothing; housing; daily necessities and services; transportation and communications; education, culture, and entertainment; healthcare; and other supplies and services. The weights of these eight categories are not disclosed. By using the contribution of each category to the overall CPI growth rate and their own growth rate, we can estimate the weight of each category based on historical data. We believe food accounts for around 19% of the CPI basket. This estimate was recently confirmed by China's Xinhua news agency, which reported in May 2020 that food accounted for approximately 17% to 21% of the CPI basket. 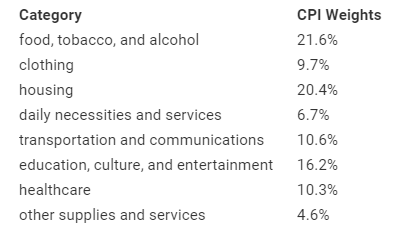 Since food prices explain a large part of the CPI fluctuations, taking a deeper look at the components of food CPI can help make monthly forecasts based on high frequency data. The weights of the different categories in food CPI can be calculated by using the same data regression as for calculating the weights of food and non-food CPI in the overall basket. Once we have these calculations, we can use high frequency data released by the Ministry of Agriculture, the Ministry of Commerce and the Development and Reform Commission for some of these categories to make monthly forecasts about food CPI. The different food CPI components have different forecast accuracy when using high frequency data. The calculated results often need to be checked against other sources and sometimes even local news in order to get a more precise forecast, for example floods in southern China can drive fruit and vegetable price up significantly in summer due to the disruption in production and transportation. Pork, vegetable, and fruit CPI can be estimated rather accurately on the basis of high frequency data, while for grain and cooking oil such a forecast is hard to make.

Since the unemployment rate does not reveal the full picture of China's economy, we estimated the output gap using industrial output and part of GDP data. The output gap can explain CPI fluctuations well, provided that there are no significant changes in food prices.

Another way to make longer term CPI forecasts is to use the PPI growth rate to predict non-food CPI. 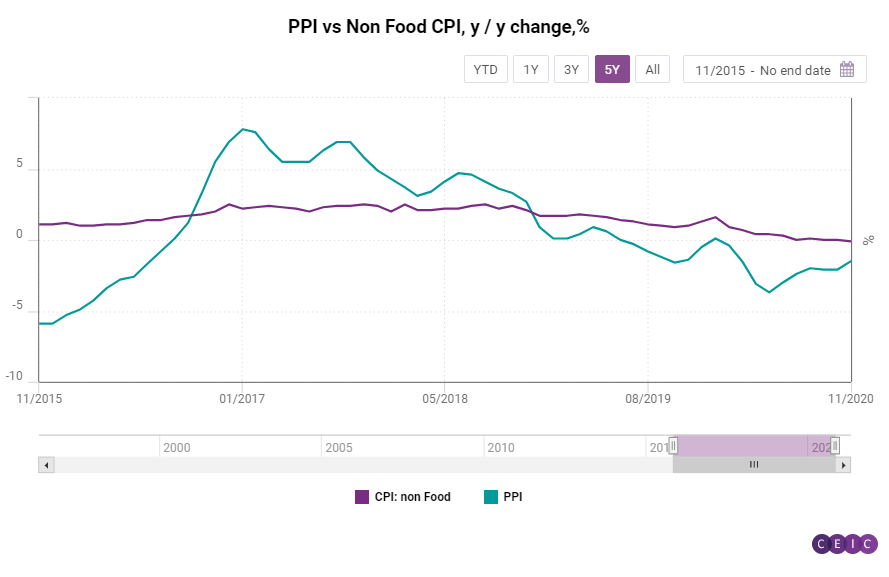 Since China's CPI growth rate is highly related to food prices, especially pork prices, it is still useful to use the pork prices cycle as a foundation to predict CPI trends and to use the output gap and PPI forecast to help adjust the accuracy of the result and factor in the influence of China's economic growth and commodity prices.

Based on the assumption that an effective vaccine against COVID-19 will be available for at least part of the world in the first half of 2021, we believe that China's CPI will inch up moderately on the back of weak pork prices and a stronger global economy.

PBOC Will Stay on Hold for Now

As PBOC gradually stopped using guideline one-year deposit and lending rate as policy rates and turned to loan prime rate and medium-term lending facility rates instead, we use the required reserve ratio as an indicator of PBOC's monetary policy stance. Since banking credit is essential to China's economic growth, the required reserve ratio is a reliable tool to cool the economy down or boost it up. 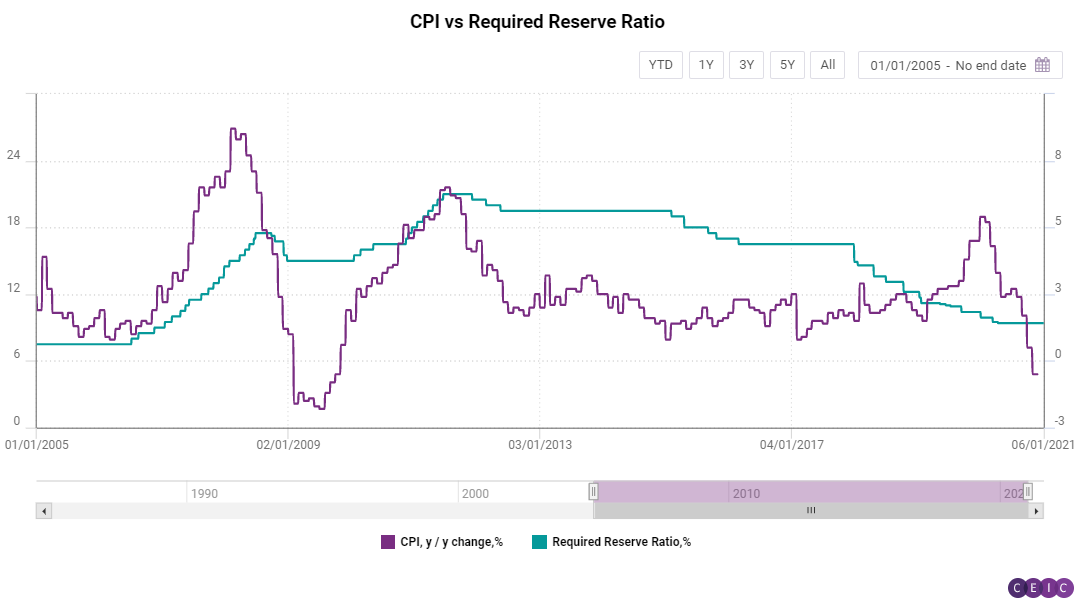 PBOC tightened monetary policy before and right after the end of the 2008 financial crisis to deal with high inflation expectation but it has stopped using monetary policy as a tool to fight inflation after 2011. Even when faced with high inflation caused by soaring pork prices in 2019, instead of raising the required rate ratio PBOC lowered it in order to deal with the downward pressure on the economy. We believe the central bank's policy focus has shifted towards supporting economic growth rather than controlling inflation. Although China has put COVID-19 under control, its economic growth is far from the pre-pandemic level. Besides, given the global uncertainty and the devastating effect of the COVID-19 pandemic on the global economy, mild inflation alone will not diverge PBOC from its current accommodative monetary policy stance.

Sign in to read the full data analysis here. Alternatively, download the latest, comprehensive analysis of China's economy with the CEIC China Economy in a Snapshot Q4 2020 Report.