With more than 2.8mn cases and over 200,000 deaths according to the World Health Organization (WHO), COVID-19 has essentially taken over the globe.

In India, the disease started spreading around the first week of March, which led to a complete lockdown by the central government for 40 days starting March 25, 2020. However, India’s case is much more difficult in many ways. While the high population density makes it imperative to control the spread of the disease to minimize loss of life, the country needs to provide livelihoods, especially to those in the informal economy such as daily wage labourers – a balance that seems almost impossible to strike.

Despite the bitter pill, the central and the state governments have fared relatively well in managing the situation triggered by the lockdown. The exodus of migrant workers meant tests and quarantines for those traveling back to their hometowns, alongside a reduction in capacity for essential service workers, such as grocery store workers or delivery services. For those staying back, food and shelter were arranged by the respective state governments. Although the cases have risen steeply, the government has been able to stop the community transmission of the disease, as the lockdown took effect.

India’s economic growth has slowed down considerably since Q2 2018, as the Q4 2019 growth figure landed at 4.7% y/y. In addition to this, the pandemic is expected to cause a severe slowdown in global trade and economic growth, exacerbating the impact on emerging economies. Furthermore, financial markets are showing high volatility, and panic sell-offs have led to a wipe-out of wealth in equity markets for both advanced and emerging economies. Hence, the impact of a lockdown on India’s already weak economic growth is unprecedented.

It is difficult to gauge the extent of damage that would be caused by COVID-19 in India due to the large informal economy and to the lack of high-frequency data for measuring real sector activity. The Reserve Bank of India (RBI) conducted a special round of the Industrial Outlook Survey with industries to capture business sentiments, which has shown a considerable worsening of key demand indicators such as production, and capacity utilization. Insights can also be gathered from the sensitive financial sector that has tightened considerably since the beginning of the pandemic. Equity markets, captured by the main stock exchange indices S&P BSE Sensex and NSE Nifty 50, plummeted as news of the first cases in India broke. Foreign portfolio investment (FPI) has witnessed a substantial outflow from India, in search of a safe haven. However, there seems to be a slight recovery of both indices, as the end of the lockdown approaches. 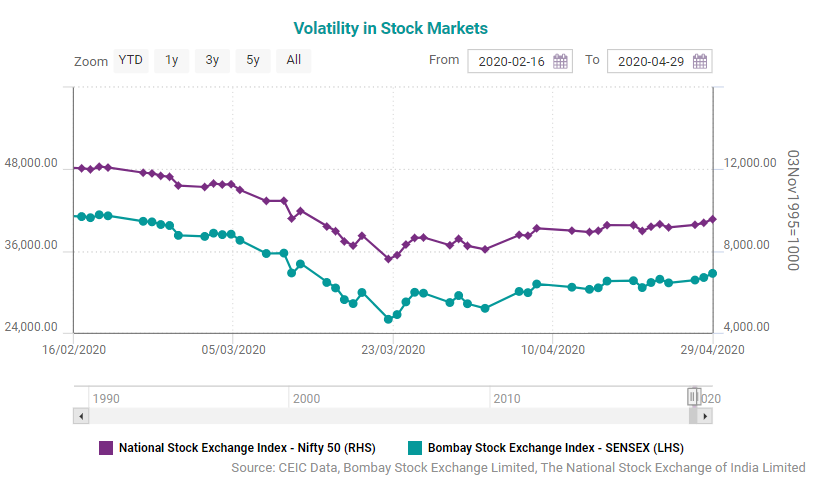 Bond yields, which are highly representative of market sentiments, have also increased as a result of FPI sell-offs, a drop in trading activity, dearth of liquidity in the market, and generalized risk aversion. However, there has been some moderation after RBI’s announcements. At the beginning of March, the benchmark sovereign bond yield slid due to the oil price crash but increased thereafter. This haphazard movement of yield curves echoes the uncertainty in the market. Mutual funds, anticipating redemption pressures, created a liquidity buffer by liquidating their positions. In terms of the exchange rate, the US dollar strengthened against the emerging economies due to the safety associated with the USD, but the Indian rupee remained stable with support from the RBI, after a brief depreciation spell. The reduction in global crude oil prices has also helped keep the INR from spiraling.

The RBI has introduced a slew of measures to provide support to the Indian economy. The Monetary Policy Committee (MOC) cut the policy rate by 75 bp to 4.4%, and also lowered the reverse repo rate to 4% at the end of March. The reverse repo rate was lowered further by 25 bp to encourage banks to utilize their surplus liquidity by lending to non-banking financial corporations (NBFCs) and housing finance corporations (HFCs). The central bank has lowered the cash reserve ratio by 100 bp to 3.0% in order to create liquidity in the market and is expected to exercise its monetary policy tools to maintain ample liquidity. Other measures include an increase in the limit of the marginal standing facility such that banks can borrow funds from RBI within limits of statutory liquidity ratio, easing the repayment of loans, as well as working capital financing, especially to micro, small, and medium enterprises (MSMEs). 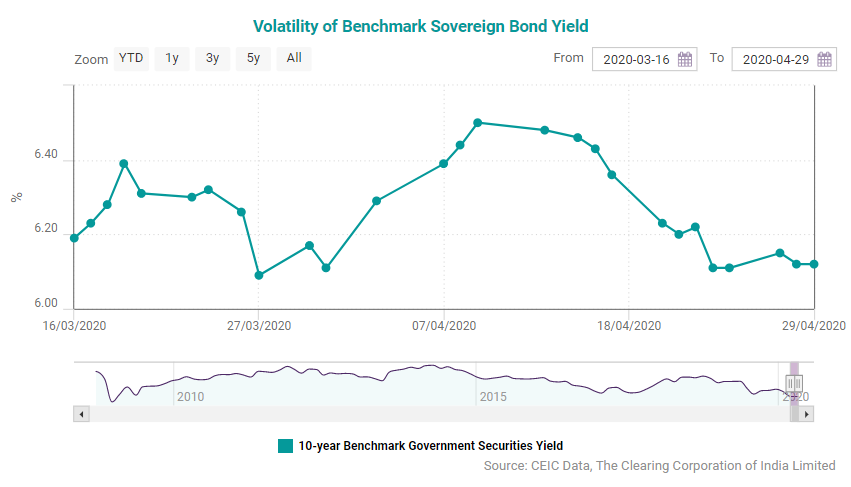 India’s Ministry of Finance has announced a fiscal stimulus of INR 1.7tn aimed at providing essentials to lower-income households, insurance cover for healthcare professionals, and income support to low-wage earners. The fiscal stimulus is low as a share of GDP - only 0.8% compared to countries such as Italy (42%, EUR 750bn) or Malaysia (17%, MYR 260bn). However, it is important to note that a large fiscal stimulus may be detrimental to India’s overall financial health, as it could further strain the fiscal deficit and make investors lose trust in the economy and the currency. On the bright side, inflation is expected to remain in the comfortable range of 2%-6%, as increased prices of non-food items would be offset by the easing of food prices.

The real sector in India will bear the brunt of the lockdown, further exacerbated by its extension until May 3, 2020. The massive drop in private final consumption expenditure coupled with huge supply-side disruptions spells disaster for a country already plagued with decelerating growth. A complete halt in the manufacturing and the services sectors will unequivocally have an adverse impact on the economy. Several companies and multilateral organizations such as the World Bank and the IMF have revised their growth projections for India downwards (S&P Global, ADB, and OECD have not factored in the lockdown). Furthermore, the ‘mass exodus’ of migrant workers from cities will lead to lesser manpower and greater unemployment across the country.

While the world has seen several financial crises over the past century, the scale of the current pandemic and its effects are unparalleled. Uncertainty is causing fear among people that is leading to panic. In India’s history, there has been only one instance of a GDP contraction – in the year 1980, by 5.2%. The 1980s saw many policy reforms, but unsustainable fiscal policies led to the balance of payments crisis in 1991 that lowered the GDP growth rate to 1.1%. Now, almost thirty years later, India is once again on the brink of a GDP contraction, as a result of the “The Great Lockdown,” as the IMF termed it. For a country as densely populated as India, a respite is difficult without complete cooperation of the public. The government is aiming for a staggered easing of the lockdown so that economic activity can start without jeopardising lives. At the same time, it is essential to increase proper testing, and adopt best practices from countries such as South Korea to stop a second wave of the epidemic.