In 2019, the diverging trend in consumer and producer prices put the People’s Bank of China (PBoC) in a policy dilemma, temporarily limiting the room for monetary easing to support the slowing economy.

In November 2019, the producer price index (PPI) dropped for a fifth consecutive month, recording a 1.4% y/y decline. The decreasing PPI and the slowing economic growth in Q3 suggest that a further monetary policy easing is warranted to support growth. By contrast, the consumer price index (CPI) rose by 4.5% y/y in November, the highest figure since January 2012, and significantly above the annual target of 3% y/y set by the PBoC in November 2019. This surging CPI serves as a reminder for the PBoC of its mandate to maintain price stability. 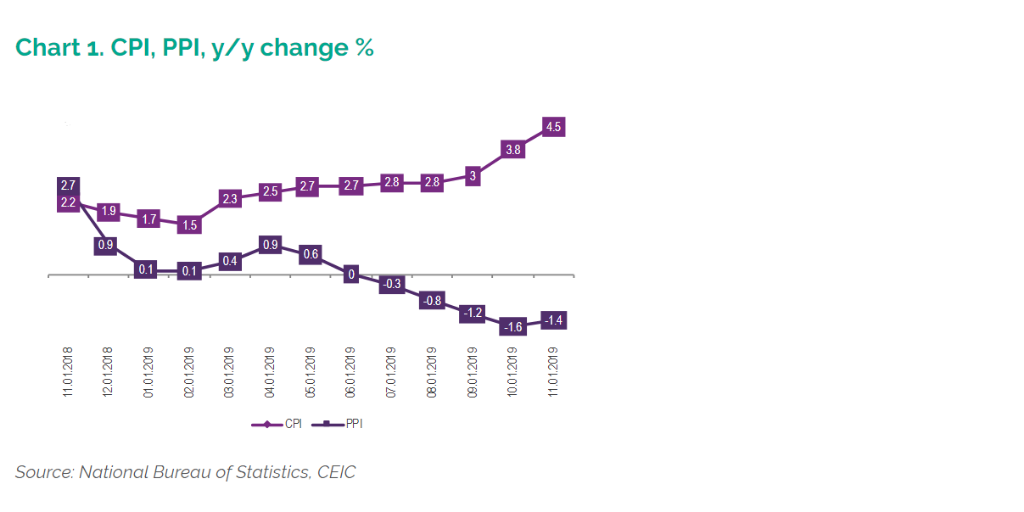 What are the Drivers Behind the Divergence?

In the first eleven months of 2019, the rising CPI was mainly driven by the soaring pork prices due to the African swine fever. The swine fever was spreading throughout China in 2019, causing a 30% loss in pork supply (15mn-16mn tonnes out of the annual demand of 55mn tonnes), according to estimates of investment management company PIMCO. Further, the inflation caused by the African swine fever coincided with the expansionary part of the hog price cycle in China, which bottomed out in 2018. The increasing pork prices push supply up, as more and more farmers offer pork in order to benefit from the higher prices. CEIC data showed that China experienced three hog price cycles from 2006 to 2018: the first one in 2006-2010, the second one in 2010-2014, and third one in 2014-2018.

Based on this data, 2018-2020 might be another hog price cycle from boom to bust. This cyclical factor, together with the African swine fever caused the surge in pork prices in the second half of 2019. In November 2019, there was a 111% y/y jump in pork retail prices, and consequently, food prices increased by 19.1% y/y. On the other hand, the core CPI, which excludes food and energy prices, remained subdued and recorded a 1.4% y/y increase.

This prolonged downward pressure from the new price reflects the subdued demand resulting from the slowing economy, lower employment and deteriorating business confidence in 2019. China’s overall economic growth slowed down to 6% y/y in Q3 2019, the slowest pace in 30 years and at the lower limit of the government’s target for 2019. The unemployment rate rose to 5.1% y/y in October from 4.7% y/y at the end of 2018, based on the 31-city survey of the National Bureau of Statistics. Business confidence in manufacturing has been dampened by the trade tensions between China and the US.

Will This Diverging Trend Persist?

The current diverging trend in the CPI and PPI is unlikely to persist in 2020. The soaring CPI would likely cool down in the second half of 2020 due to several major factors. First, sow stock increased by 4% m/m in October, according to the Ministry of Agriculture and Rural Affairs. The rise in sow stock would result in higher hog production in the following six months. Second, the Chinese government has committed to provide up to USD 4.28mn in subsidies for introducing new technologies to improve sanitary conditions on farms as a measure to prevent further spreading of African swine fever. The subsidies might also be spent on automatic feeding technologies to increase productivity. Besides, the government, through the Agricultural Bank of China, pledged to offer RMB 50bn (USD 7.14bn) in the next three years to support the hog farming industry. Third, ahead of the upcoming holiday season, the government has opened up its strategic pork reserve in order to maintain pork price stability. Fourth, more pork imports could fill a part of the supply-demand gap...

Find out more on diverging trends for China's CPI and PPI as well as the impact on the region's Monetary policy. Access through our CDMNext platform here.