India’s CEIC Leading Indicator underwent a sharp decrease in September, to 103.3 from 112.7 in August. The decline comes after three consecutive months of increase and is driven primarily by a drop in gross electricity generation by 1.7% y/y, the first decline since August 2020, fuelled by the ongoing global energy crisis. Vehicle production, which had been slowing since April due to dissipating low base effects, decreased in September by 37.5% y/y, from a growth of 5% y/y in August, which also contributed significantly to the fall in the CEIC leading indicator. Finished steel production growth moderated to 4.7% y/y in September 2021 from 5.5% y/y in August. Similarly, the wholesale price index for food slowed down significantly, by 2.3 pp to 1.1% y/y in September, but had virtually no impact on the leading indicator. The reduction in the CEIC Leading Indicator can also be attributed to a sustained deceleration of growth in money supply, M2, since June 2021, to 11.2% y/y in September 2021. 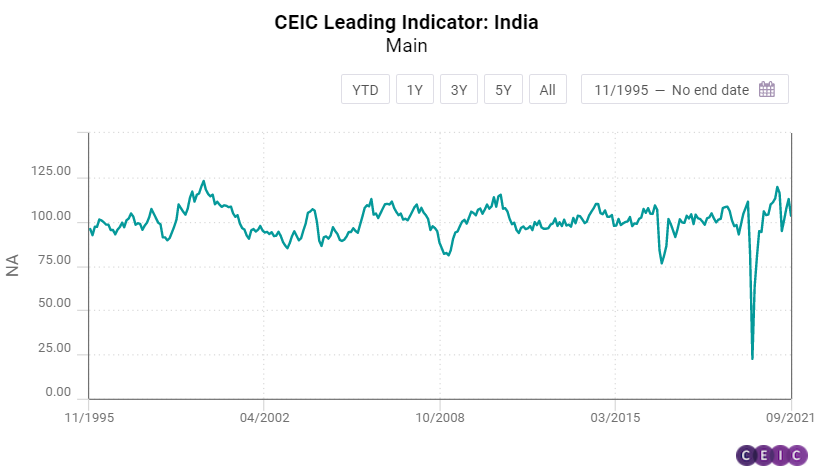 On the other hand, other financial indicators such as equity markets and treasury bills have contributed positively to the leading indicator. Equity markets  touched new record highs in the month of September, with the Bombay Stock Exchange closing at 59,126.4, in comparison with 57,552.4 in August, averaging at 58,781 over the month. The 91-day treasury bills yield increased to 3.45% pa by 0.05 bps in September. 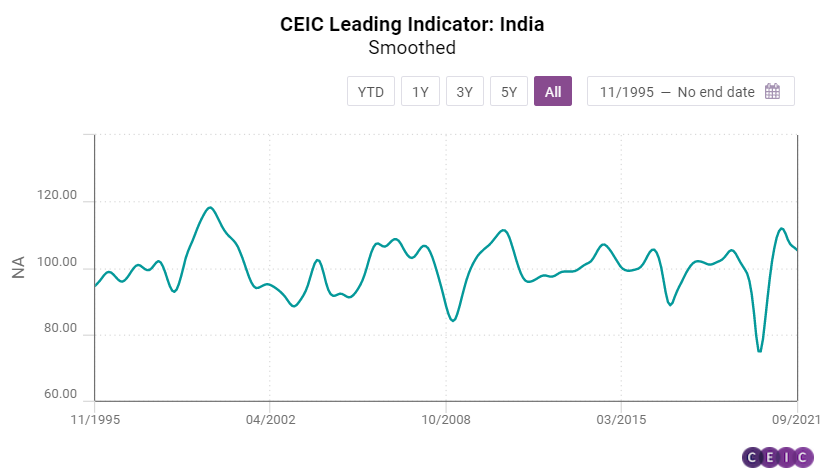 Due to the intense decline in the actual CEIC leading indicator, the smoothed CEIC Leading Indicator also decreased to 105.4 in September from 106.0 in August, suggesting a more long-term downward risk to growth. Besides apprehensions of another wave of COVID-19, there is now an added risk from the global energy crisis and supply chain disruptions, which can decelerate India’s economic recovery further.